An Evening with Beverly Luff Linn is Jim Hosking’s second feature film, after his debut The Greasy Strangler attacked good taste and audiences worldwide and set a new milestone for absurdity in 2016.

An Evening With Beverly Luff Linn may appear a bit more airbrushed for a wider audience but Hosking largely stayed true to himself, once again employing an array of quirky, weird and funny characters.

This is the story of Lulu Danger (the divine Aubrey Plaza!!!) who works at the café of her boring husband Shane (who knew Emile Hirsch would be so brilliant doing comedy?!). When Shane is asked to let one of his employees go he chooses his own wife instead of one of his male workers. Now Lulu sits at home the whole day watching telly when one day the advertisement for ‘A Magical Evening with Beverly Luff Linn’ catches her full attention. Enter Colin (Jemaine Clement from Legion and What We Do In The Shadows), a man offering Lulu’s brother Adjay (Sam Dissanayake, already a favourite of mine in The Greasy Strangler) to retrieve the money Shane and his idiotic employees have stolen from him.

Lulu sees her chance of escape, kidnaps Colin and the money and they hide in the hotel where Beverly Luff Linn (Craig Robinson) is expected on stage in a few days.

Colin falls in love with Lulu but the only man she is interested in is the ominous Mr. Beverly Luff Linn. 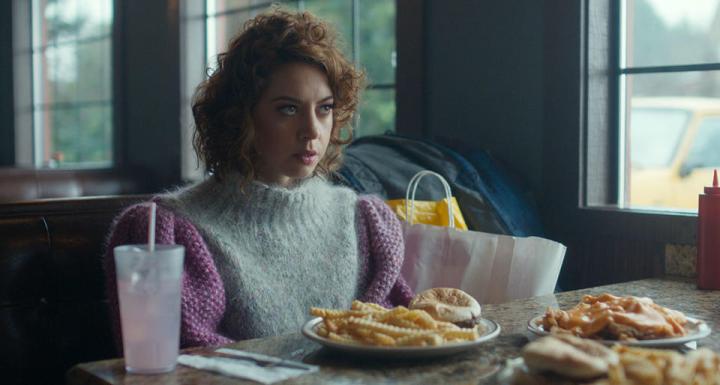 An Evening With Beverly Luff Linn is a comic delight, the mad and exaggerated characters entertaining the audience throughout a story that is crime drama, love story and actually also a lesson on life.

Once you look deeper than the obvious freakiness of it all you see it’s about the madness of average everyday life. Unhappy marriage, the longing for lost loves, the harshness of unrequited love and in the end you may realise that when a man goes to the length to visit every store until he finally finds the heavy-flow tampons you requested it might actually be worth giving that man a chance in love.

The movie neatly plays with the expectations of the viewers and after all the constant build-up of the ‘magical evening’ I’m telling you you’ll be up for a huge surprise once Beverly Luff Linn makes his appearance on stage.

An Eveing With Beverly Luff Linn has been streamlined in contrast to its predecessor The Greasy Strangler, though the dialouge is still mad enough but without the heavy repetitions and there are countless wonderful far-out scenes to enjoy. The characters are still a nice mixture of oddballs. losers and idiots and the story, though more than half an hour longer than Greasy Strangler, manages to entertain the viewer until the moment when Bevery Luff Linn finally gets on stage, unleashing the funniest hatefest of anything Scottish I’ve ever witnessed.

Jim Hosking is a new breed of filmmaker, tapping the vein of John Waters, Ed Wood and Roger Corman, adding his own unique spice of crazy, creating movies that don’t fit into any genre and that are fortunately far away from the often soulless crap the industry continuously unleashes upon humanity.

This time Hosking’s main cast includes bigger names and the director does his best to put them into the worst fashion abominations the human eye has ever seen, making sure the co-stars and sets are just as much of a challenge for the Instagram-trained eye.

I don’t know how to better explain it, but there’s a spark that transfers from the screen to the audience and I dare you not to sing along when FR David’s 80s hit Words is being played during the epic dance scene at the end of the movie

I urge you to enter the inimitable wonderful weirdness of Jim Hosking’s world and to follow his invitation of a magical, highly entertaining and very funny evening with Beverly Luff Linn. One of my absolute cinematic highlights of 2018!

Error: Twitter did not respond. Please wait a few minutes and refresh this page.

A Flibbertigibbet, a Will-o’-the-wisp, a Clown

Murder Down To A Tea

Page by Page, Cover by Cover, Book by Book! - Simples!

The latest news on WordPress.com and the WordPress community.